Copyright:
2016
Funding:
No funding has been declared.
Competing Interests:
No competing interests have been stated.

In an endemic area of leprosy, a practitioner confronted with a patient with an acute or chronic atypical rash that is not diagnostic and/or fails to respond to treatment would generally have leprosy in his differential diagnosis. In a non-endemic area, leprosy would not be considered in the differential diagnosis because practitioners have no familiarity with the disease in either medical practice or education. In endemic areas, practitioners not only have diagnosed the disease in practice, but also have been educated about the disease and its management. The only danger that occurs in endemic areas is that leprosy may be over diagnosed, since the organism is not found in cultures, skin scrapings, or skin biopsies in patients with pure neural leprosy, tuberculoid leprosy (TT), and, possibly, borderline tuberculoid leprosy (BT). If a physician is to improve his diagnostic acumen, he has to know what to look for and how to integrate the clinical signs to arrive at a diagnosis of leprosy. Fortunately, the diagnosis is more easily established by utilizing the following approach:

To identify the dermatologic diseases that simulate leprosy, one must recognize the nature of cutaneous manifestations of both the non-reactive and reactive presentations of leprosy, as seen in Tables 1, 2, and 3. In non-endemic areas, these dermatologic simulants can be more easily differentiated from leprosy by their clinical presentations and especially by their histopathology.

Ordinarily, cutaneous medical diagnoses are verifiable by distinctive symptoms, signs, test results, histopathology, or a combination of these. The dermatologic simulants of leprosy based solely on clinical grounds with no objective proof are “educated guesses.”

There are patients with systemic diseases who have skin eruptions that suggest leprosy, without ocular or neurologic changes (see Table 1). There are patients with systemic disease who present with ocular and/or neurologic changes without the appreciated skin eruptions of leprosy. Among these diseases are sarcoidosis, syphilis, tuberculosis, Lyme disease, Behcet’s disease, inflammatory bowel disease, polyarteritis nodosa, periodic Mediterranean fever, and lymphomatoid granulomatosis.

When one reviews the literature for acceptable leprosy simulants, some of these “mistakenly” diagnosed cases were treated with immunosuppressive drugs, which resulted in the worsening of symptoms and the appearance of new lesions. When biopsied, these lesions revealed not only the histologic features consistent with leprosy but also the presence of M. leprae on Fite-Faraco stain. “The clinician backed into the diagnosis.”

The diseases that can mutilate the ear in ways that are similar to the destruction seen in leprosy are lupus vulgaris, leishmaniasis, lupus erythematosus, Lobo’s disease, sarcoidosis, relapsing polychondritis, lymphoproliferative diseases, and keloids (see Table 2).

The skin changes resulting from the underlying superficial sensory autonomic and motor neuropathy are anhidrosis, resulting in dryness and fissuring of hands and feet; ichthyosiform changes of the arms and legs; dysmorphea of the body secondary to muscular palsies and paralysis; malum perforans; and charcot joints of the ankles. Other clinical signs are alopecia due to the diffuse lepromatous infiltration, especially of the eyebrows; gynecomastia due to testicular involvement; and dystrophic nail changes due to the disease or, secondarily, due to complicating dermatophyte infection.

The cutaneous reactions (see Chapter 2.2) that a patient may develop depend on the type of leprosy. Type I reversal reactions are seen in TT, BT, and BL and are lymphocyte driven. Type II erythema nodosum leprosum (ENL) spectrum reactions are seen in BL and LL and are neutrophil driven. Lucio’s phenomenon is an endotheliitis of unknown origin (see Table 2).

The skin changes in Type I reversal reactions are characterized by keratosis spinulosa; edema and ulcerations of existing lesions; edema of the face, hands and feet; the appearance of new lesions; and tender swelling of involved nerves. Among the cutaneous disease simulants of reversal reactions are urticaria; angioedema; erysipelas; gyrate erythema; Well’s syndrome (eosinophilic cellulitis); erythema multiforme; tumid, subacute and acute lupus erythematosus; and drug eruptions (including fixed drug eruptions).

The clinical spectrum of Type II ENL lesions usually presents as inflammatory, tender nodules and plaques, and occasionally vesiculopustular eruptions, which are characterized histologically by a diffuse non-vasculitic neutrophilic infiltrate. The inflammatory plaque or an annular lesion seen in acute cutaneous lupus erythematosus, with or without systemic involvement, can resemble the ENL lesions seen in lepromatous or borderline lepromatous leprosy. These eruptions are basically inflammatory non-infectious, non-granulomatous, non-vasculitic infiltrates with specific histologic features.

Among the diseases that can resemble those of the spectrum of ENL are the neutrophilic dermatoses (Sweet’s disease and pyoderma gangrenosum) because of their clinical appearance; histopathologic sterile non-vasculitic neutrophilic infiltrate; subcorneal pustular dermatosis (Sneddon-Wilkinson disease); pityriasis lichenoides et varioliformis (PLEVA); and varicella or disseminated herpes zoster. A rare presentation of ENL is characterized by a necrotic ulceration of the penis, which must be differentiated from venereal disease or a non-infectious neutrophilic ulceration such as Behcet’s disease or Crohn’s disease.

When borderline and lepromatous leprosy present with erythema nodosum-like lesions, one might consider systemic non-infectious and infectious granulomatous diseases that have cutaneous plaques or nodules plus erythema nodosum, such as sarcoidosis, coccidiomycosis, histoplasmosis, South and North American blastomycosis, and tuberculosis, in the differential diagnosis.

Ulcerative conditions that can simulate the lesions of Lucio’s phenomenon are the leukocytoclastic vasculitides and the vasculopathy associated with cryoglobulinemia, macroglobulinemia, and fibrinogenia, and calciphylaxis, cholesterol embolism, coumadin necrosis, and factitial dermatitis (see Table 3).

Patients with nonreactive and reactive leprosy especially can have arthritis and tendonitis, which can simulate clinically, symptomatically, and serologically those seen in autoimmune disease such as rheumatoid arthritis and systemic lupus erythematosus, and may be inadvertently treated with immunosuppression or biologic drugs, which can unmask the presence of leprosy and/or type I or type II leprous reactions.

Although studies have shown that HIV-1 infection is not a risk factor, cases of borderline tuberculoid leprosy with type I reversal reaction have been reported and attributed to the induction of the immune reconstitution inflammatory syndrome associated with highly active antiretroviral therapy (HAART).

Finally, the systemic drugs used to treat leprosy (see Chapter 2.6) can cause adverse hypersensitivity reactions, which can simulate the skin eruptions seen in type I and type II lepra reactions. Dapsone, rifampin, and ofloxacin can cause skin lesions such as urticaria and angioedema, which can simulate lesions seen in type I reversal reactions. Dapsone and ofloxacin can cause hypersensitive adverse skin eruptions such as blistering and ulcerative necrotic ulcers, as seen in vasculitis, erythema multiforme, and pustular, plaque, and nodose skin lesions as seen in so called neutrophilic dermatoses, and erythema nodosum, which can be seen in type II (ENL) reactions. Minocycline has caused a lupus erythematosus syndrome resembling that seen in erythema nodosum leprosum. The anti-TNF biologics have caused, as a complication of therapy, non-infectious and infectious granulomatous dermatoses characterized by plaque and nodular lesions simulating these seen in tuberculoid and borderline tuberculoid and lepromatous disease. [1] 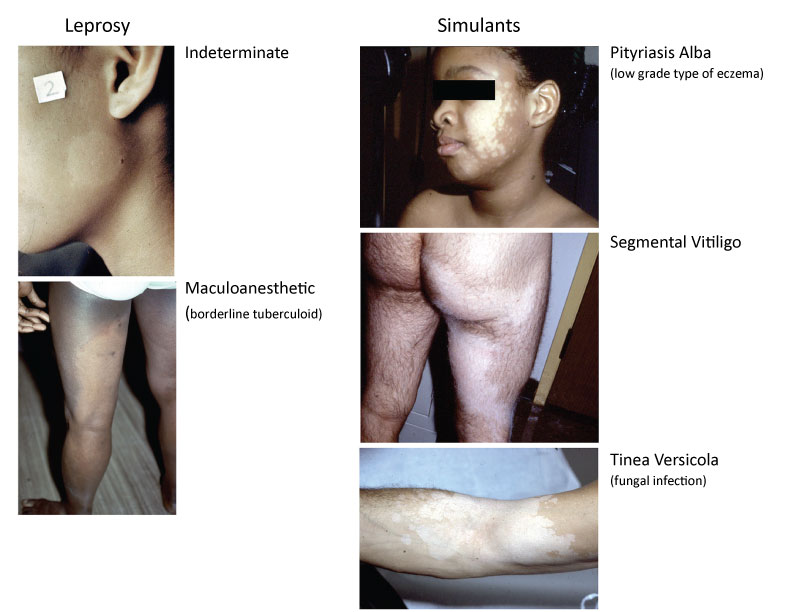 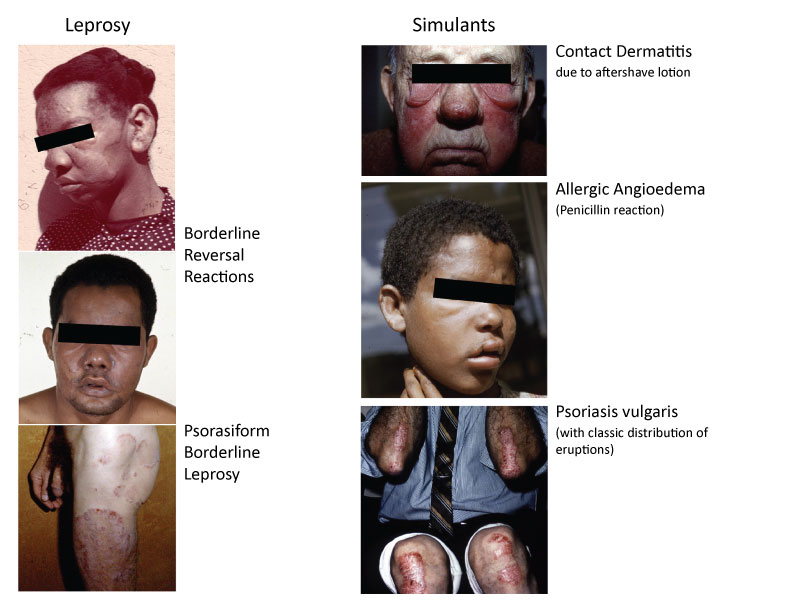 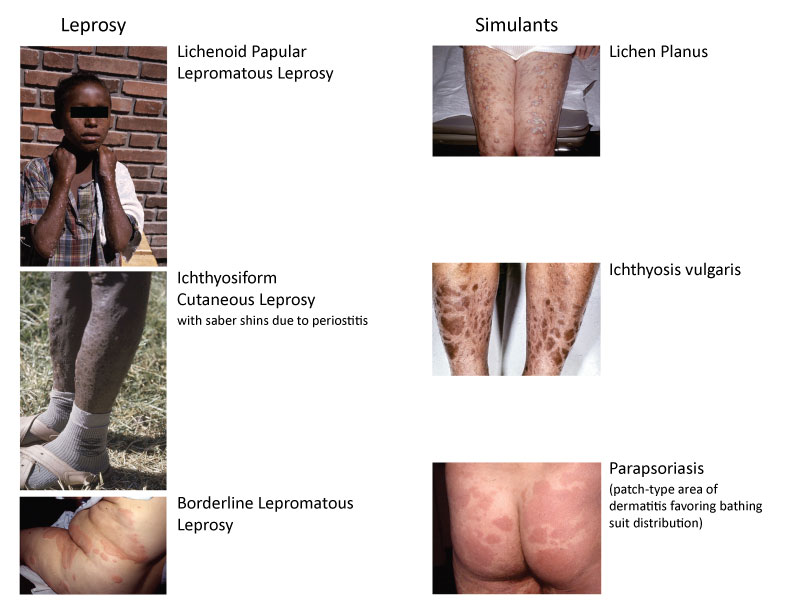 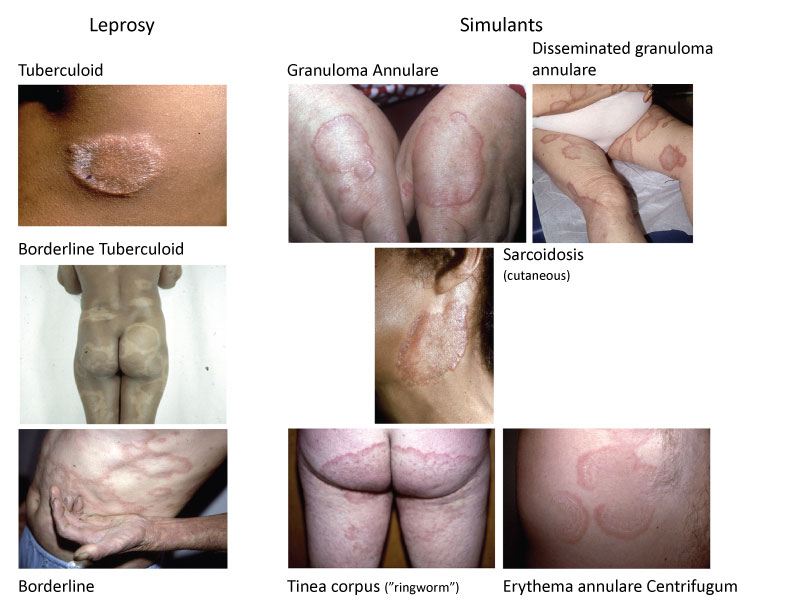 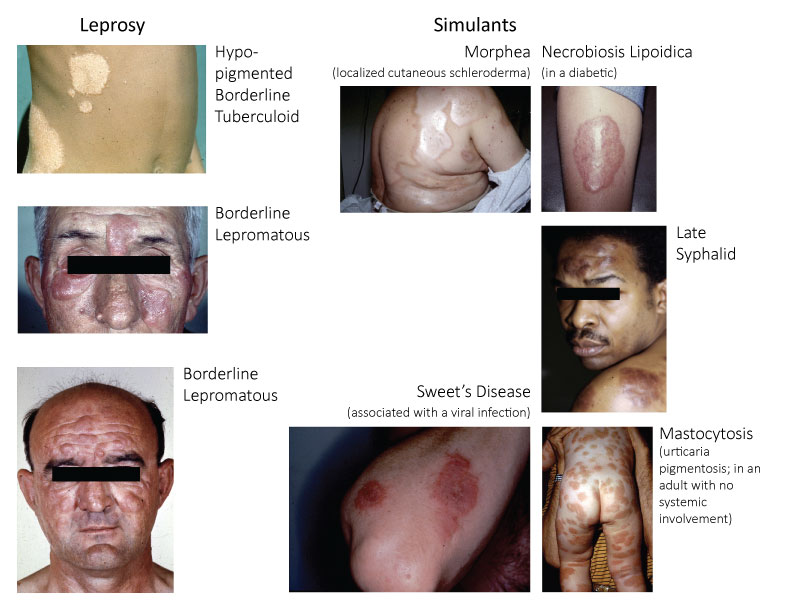 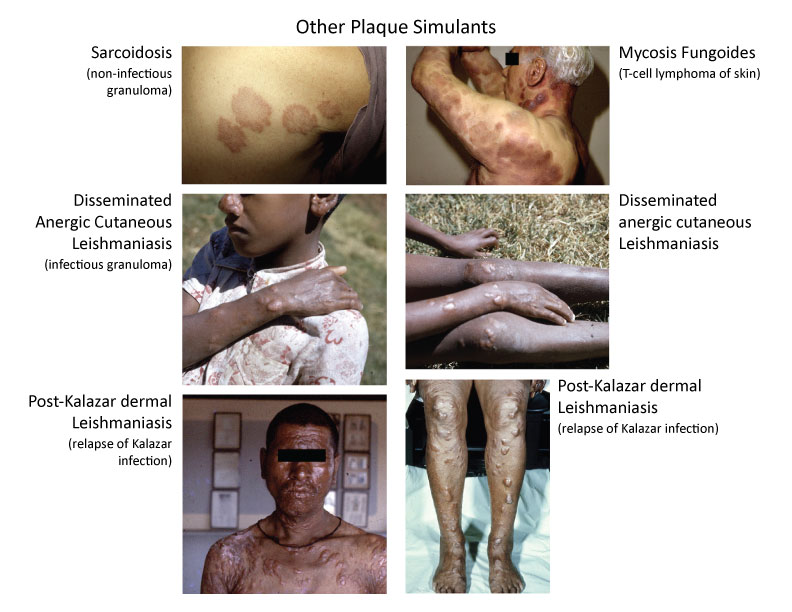 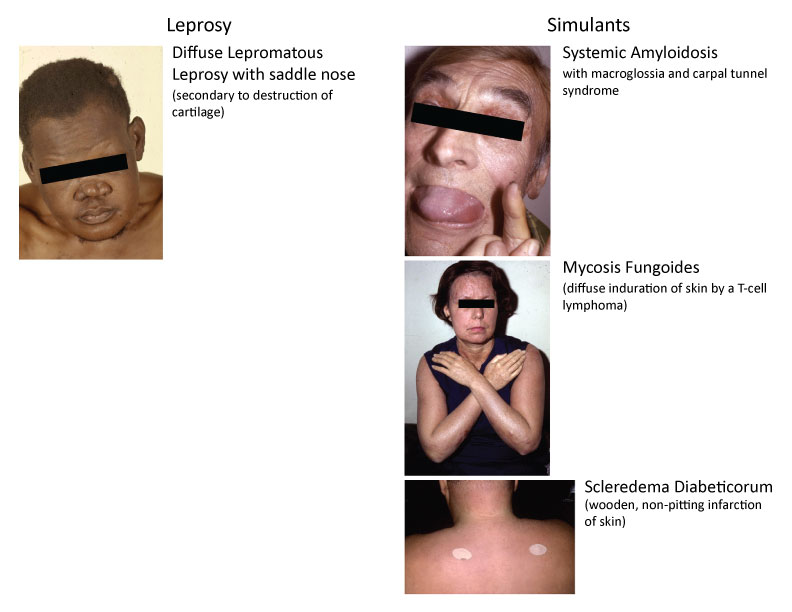 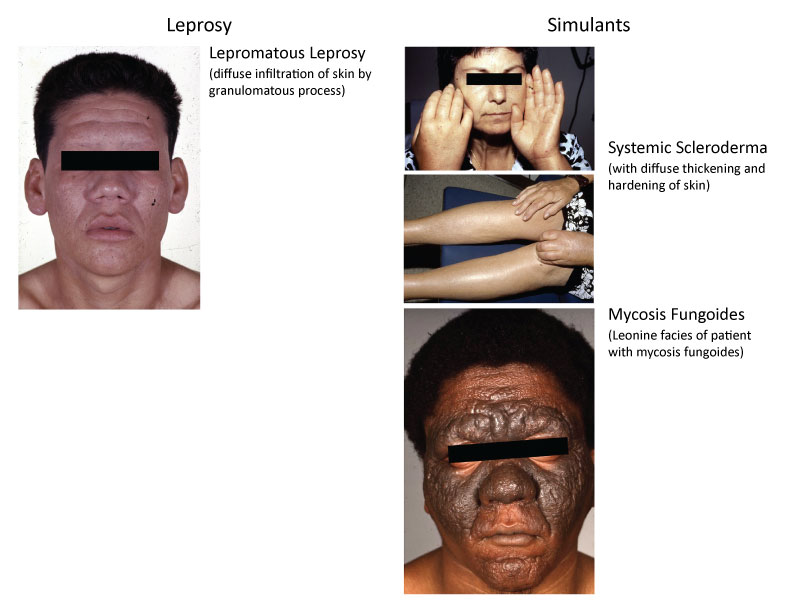 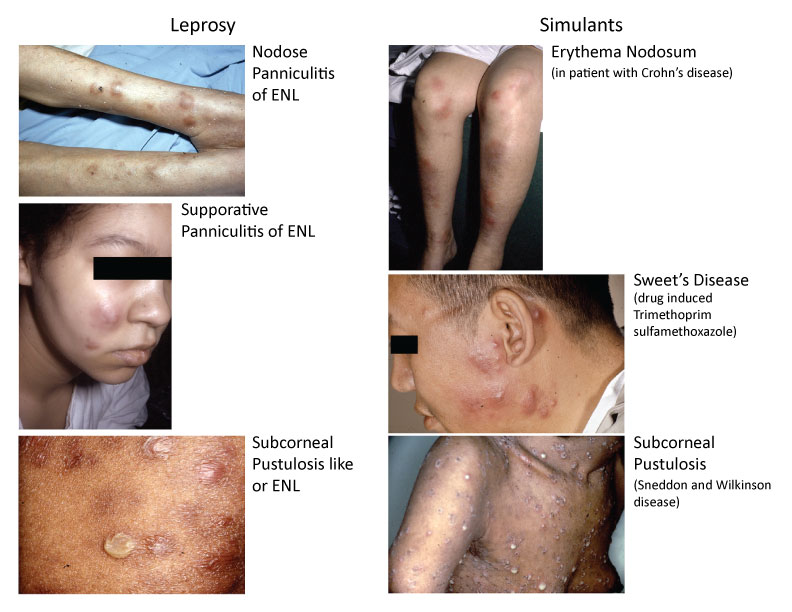 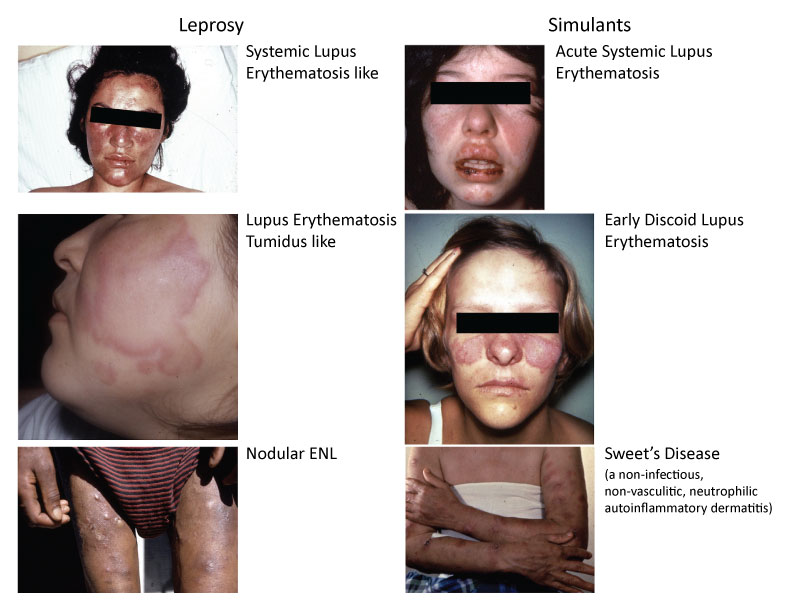 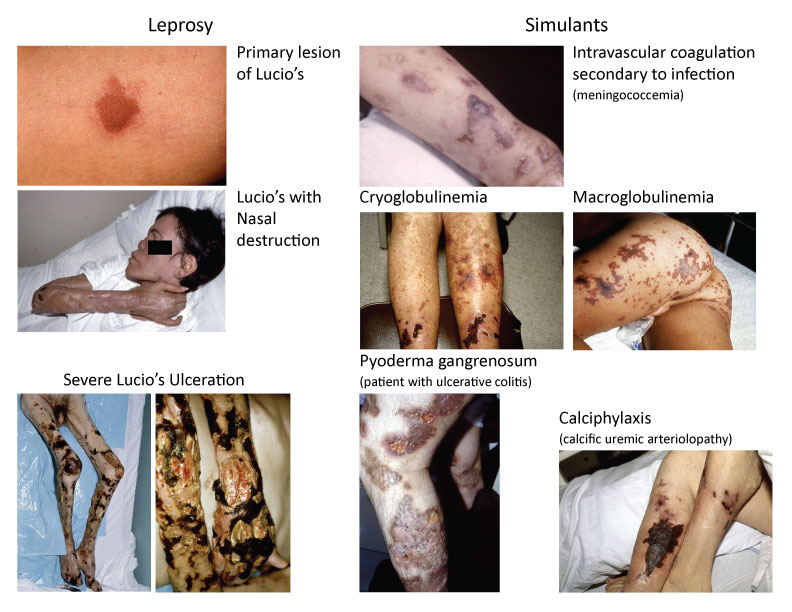